By SloppySwatches in Swatches on September 1, 2015
4 comments

Hey guys! I cannot tell you how extremely excited I am to share today’s swatches with you! I have the Moste Potente Potions collection that is being released today from Bohemian Polish! This is a Harry Potter themed collection of seven different colors and the maker has put so much love and thought into these polishes it blows me away! Each polish has it’s own backstory relating to a different potion. We are scheduled to have rain almost all week down near the gulf so as soon as I saw these pretties in my mailbox I rushed to get them on, but the sun disappeared right after I got this first polish on!

All of my swatches today are topped with “Flash Dry” from Bohemian Polish, this is a super quick fast drying topcoat that dries to a nice glossy finish without dulling any holographic effects and without a harsh smell!

First up is Half Life, it is described as “a silver linear holographic polish with a metallic finish.” This one is based off of unicorn blood, and its super fitting! Half Life is a bright silver polish with almost a foiled finish and a very strong linear holo. Easily opaque in 2 coats and it also dries down to a glossy finish.

Next up is “Steal Your Face” and this is described as”a green holographic polish with green to red color shifting shimmer.” This polish is based off of polyjuice potion and is that color that is in between a chartreuse and a gold. It was surprisingly flattering on my skin tone and has a nice strong holo. This was opaque for me in 2 coats but may need a third depending on how thick you like your coats.

Next up is Liquid Luck and is described as “a warm golden-orange holographic polish with warm gold glitter.” This is based on Felix Felicis and it is a beautiful creamsicle orange with a ton of golden shimmer that translates well on the nail! This was one of the sheerer polishes for me and I did 3 thin coats here:

Next up is Love Ption No. 9 3/4 and it is described as “a bubblegum pink holographic polish with iridescent flakes.” It is named after Amortentia, the love potion! I seriously die over this name, it is too cute and this polish was another one of my favorites! It is one of those pink shades that gives you an instant tan. The formula is a little bit thicker on this one than the others and I had to be mindful of where the flakes were ending up a bit but the effect is super pretty! I did 2 coats here:

Next up is See No Dreams and it is described as “a soft purple holographic polish with purple to blue color shifting glitter.” This is based on Dreamless Sleep and it is such a dream! This one I got away with 2 coats on but I did go back and add one more coat on my middle finger and it did deepen the color a bit! I love the blue/purple flash that the glitter adds in to the holo and I feel like it makes this polish really special!

Next up is Don’t Mind The Steam and it is described as “a magenta holographic polish with golden shimmer.” This polish is based on the Pepperup Potion. The gold shimmer translates really well in this polish a well and I did 3 thin coats for full opacity.

The last polish of the collection is called Furry Little Problem Solver and it is described as a “bright blue holographic polish [that] has iridescent flakes…” and is based on the Wolfsbane Potion! This was another favorite of mine, it does have the little bit thicker formula like the pink one did but the flakes show up gorgeously on the blue! My bottle did have the tiniest bit of unmixed pigment but with a good shake it dissolved really well. I’ve been wear testing this for about a day with no flakes, tip wear, or anything! Two coats shown here:

I was also sent a cuticle oil by Bohemian Polish in the scent “Butter Beer” and oh my gosh, it smells divine! It reminds me of caramel candies and brown sugar, it’s a very sweet scent but I didn’t find it to be too strong (although it totally made me hungry lol!) It has a roller ball tip for easy application and it absorbs easily into the skin. It left my cuticles feeling moisturized all the way into the next day, even after doing all 7 seven swatches in one day! 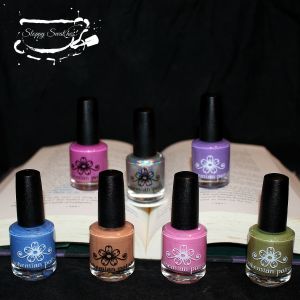 So that rounds out my review and swatches of the Moste Potente Potions collection from Bohemian Polish, these will retail for $9 except for Half Life which will be $10. You may use coupon code “WANDCORE” for 20% off your order so head on over and check it out!

View all posts by SloppySwatches